The faith of an alto: remembering Grandma 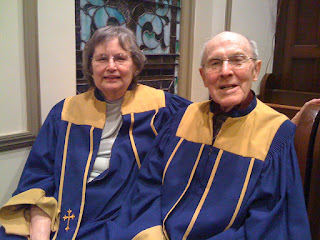 “Therefore are they before the throne of God, and serve him day and night within his temple.”  Revelation 7:15

Grandma was an alto.  I learned this when I joined the choir as a ten year old, before my voice changed.  Mom placed me on the second row, between grandma and grandpap.  The joke was that this was for the sake of public order.  It took advantage of the fact that grandpap could only hear well in his right ear.  It kept me at a bit of a distance from those other tenors and basses who always had a joke to tell at the wrong moment.  But really, I think, it was so I would learn from grandma what it meant to be part of a choir.

Altos don’t get to sing the melody, like the sopranos, and they aren’t generally given dramatic leaps or catchy rhythms like basses.  They hold the middle voice and keep the beat.  Sometimes they will sing pretty much the same note for whole lines of music.  The other voices rise and fall, but altos are steadfast, anchoring the other members of the choir and drawing them together into a sound that is all the richer and more vibrant for their humble contribution.

There isn’t any choral singing without altos—just lots of performers vying for attention, delighted in the sound of their own voices.  The blend is the truly beautiful thing about choral singing.  It relies on listening to each other, and requires that some must take the humbler place, offering their best as a form of service to the whole, giving what they have in love that does not seek for recognition or honor.

It’s no mistake that the church has long given choral singing the primary place in Christian worship.  In that wondrous vision of heaven that I just read to you, that great multitude before the throne of God, “from all tribes and peoples and tongues,” they praise their Redeemer with a common song.  “Amen!,” they sing, “Blessing and glory and wisdom and thanksgiving and honor and power and might be to our God for ever and ever! Amen.”

There are so many voices, more than we can number, and every kind of person God has made has a place in that choir.  But they are all singing together.  The theologians sometimes debate about whether they sing in one voice or in perfect harmony.  But what is certain is that there must be altos, the ones who learned to bring people together here on earth.  In heaven, perhaps, we all learn to be altos.

Grandma sang in the choir right here at Saint John’s most every Sunday for over half a century.  I doubt that would have ranked singing as the most important thing in her life.  Yet the kind of singing she did all those years reveals a great deal about the way she approached everything else.

Like an alto, she never liked to be the center of attention.  In her youth, she was a great basketball player, but only on the defensive half of the court.  She was slow to express an opinion or to give advice, slower still to pass judgment.  She spoke in a quiet voice.  But a good deal of the time, she just listened, with sympathy and understanding.

She probably clipped five thousand stories from the Herald-Mail over the decades, stories about other people she knew and loved, news she thought you would appreciate.  I got an envelope of clippings every other week the whole way through college and sometimes it was the best thing in a week.  A word from home,  yes.  But also a reminder that someone loved you so much she was thinking of what you would like as she scanned the evening paper.  Sometimes, when you went to see her, you would notice the little stacks on the table beside her chair—a pile for Carol here, something Neal would like over there, a word for this grandchild or that one.

She made a life out of acts of humble service, filling out the sound of life’s song with gifts that were essential, though often taken for granted.  She moved into her husband’s boyhood home, with his parents still in it, and as they aged, she cared for them as well as for four children.  She cooked dinners—there was always a cake in the cupboard-- and she sewed dresses.  She drove her children to sports practices and 4-H meetings, helped them get those record books together at the end of the year and milked the cow before dawn so they’d have a few more minutes to sleep.  She sent cards and little gifts for every holiday, birthday and anniversary to all those children and grand-children and great-grandchildren.

She served this congregation as its treasurer for decades, in the days before Quickbooks and Excel, when every figure had to be checked and rechecked on the calculator in her little office beside the kitchen.  For many years she organized the annual turkey supper, a highlight of Clear Spring’s social calendar, a meal with no shortcuts that depended on bringing together dozens and dozens of volunteers, some of whom had their own opinions about how things should go.  Work like that demands smarts and diligence, but also an ability to listen and negotiate, which made it just the sort of thing she could do best.

Like an alto, she delighted in drawing people together.  She loved family gatherings at Christmas, Easter and Thanksgiving, and the annual Fridinger reunion, held on a summer’s day in her backyard.  She would sit quietly in her chair while the chaos unfolded around her, beaming.  There were piles of pictures to look at afterwards, every change in family life remembered and cherished.  When there was conflict, she worked to keep the peace, and when we celebrated together, she had the broadest smile.

Last week, as she was dying, she was fairly lucid for a few hours, able to make her wishes known.  What she wanted then was her family, to talk to her children, to have them by her side.  Getting better, going home, being comfortable—these things didn’t matter so much.  But her little choir, those people she had served in love all those years, she wanted them close at hand every last minute possible as she prepared to depart this life.

How, we wonder, did she come to be like that?  Why did she take the humbler part and serve so earnestly, why step aside and let others have the credit?  Uncle Charles and Uncle Bill would say that Grandma was always a little shy, and the social expectations of her time had a role in the shaping of her life.

But I also believe that Grandma saw this as the life God had given her, that it was her way of being faithful to Christ, a sign of His grace at work in her.  “Let the same mind be in you,” wrote Saint Paul, “that was also in Christ Jesus, who, though he was in the form of God, did not count equality with God a thing to be grasped, but emptied himself, taking the form of a servant.[1]”  You will have Christ’s mind in you, he tells the Philippians, when you “do nothing from selfishness or conceit, but in humility count others better than yourselves.”   “Let each of you,” he continues, “look not only to his own interests, but also to the interests of others.[2]”

The Scripture text that my mother and her siblings chose for Grandma’s memorial card is very similar, from the Epistle to the Romans, “love one another with brotherly affection; outdo one another in showing honor. Never flag in zeal, be aglow with the Spirit, serve the Lord.[3]”  He’s not giving generic moral instruction here.  These are words to those who belong to Christ, those in whom the Spirit is at work.  You will show your faith, Saint Paul means, when you become like your master, who has loved you so generously.  He urges you on in the face of difficulty.  He has offered the complete act of service when He gave His life for you.

This is the kind of life that binds people together.  Jesus gave us more than an example.  His humble service led Him to the Cross, and through it to a new resurrected life, a life infused with the power of the Holy Spirit.  And He shares that life, and its victory over sin and death, with all who come to Him in faith.  Our hope in the face of death depends on the power of His generous love, so strong that “neither life nor death, nor anything else in all creation can separate us” from Him.[4]

As our lesson from Revelation tells us, He has won for Himself a people, a flock gathered in peace.  He feeds them, and protects them from the heat of the day, and wipes away the tears from their eyes.  They thrive through His humble service and His sacrificial love.  In profound gratitude and joyful delight they sing to Him, one voice resounding across the new heavens and the new earth.

Today we send on, with our prayers, a new alto for that eternal choir.  We look to Him who gave her to us in gratitude.  Our sadness is mingled with  joy in what she will know with Him in the life beyond death.  By His grace, in time, may we blend our voices once more with hers in that song that has no end.