For Reflection: "As self-centered as I please"

“If I merely tolerate my neighbor on the assumption that all of us are equal, that means I can take no interest in the question of which ones of us are right and which ones are wrong; it means I am denying the community the use of my intelligence and judgment; it means I am not prepared to defer to those whose abilities are superior to mine, or to help those whose condition is worse; it means I can be as self-centered as I please.  Wendell Berry, qtd. in Christian Smith, et al. Lost in Transition, 68.
Posted by Rev. Mark A. Michael at 11:00 AM No comments:

Burdens, Freedom and the Heart of the Law

‘This people honors me with their lips, but their heart is far from me.”  St. Mark 7:6

When I noticed that today’s Gospel lesson was about burdensome laws, I had to smile.  Because for the last month, my life has been dominated by one particular burdensome law—Virginia Civil Code 46.2-1177.  That’s the law that requires that all Fairfax County vehicles pass an emissions test prior to registration.  Now, in principle, I think it’s a very good law.  I think we have a responsibility to limit carbon emissions, and I want my kids to breathe clean air, and I’m sure that auto mechanics do work that contributes to the common good.  But in practice—well let’s just say I’ve made eight trips to Sunset Hills Automotive, and we haven’t passed yet.  I’m on a first name basis with everyone in the shop.

I drive a big old car, which I inherited from my grandfather.  He always liked a pretty car and this one was his last one and his favorite.  Sometimes, when I climb into it, I can still smell my grandmother’s perfume.  I love the leather seats and the leg room, but the car has reached a certain age, and apparently its valves, sensors and gas cap appear to be hurtling down the “way of all flesh.”  Over at Sunset Hills, they test it, and when it fails, they find something wrong and fix that.  Then I have to drive it for fifty miles at varying speeds to reset the monitor and first thing in the morning, they will test it again.  And the process repeats, and the repair bills rise, and I’m left a rather less enthusiastic environmentalist than I was when I first moved to Virginia.  All those trips back and forth to the mechanic’s, all that steam being released from my ears—when you stack up those emissions against the ones escaping from the minuscule gaps around the sides of my gas cap, I just wonder how that computes.
Read more »
Posted by Rev. Mark A. Michael at 7:00 AM No comments:

The Anchoress in the Loft 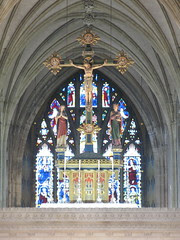 “Happy are they who dwell in your house! * they will always be praising you.”
Psalm 84:3

“How did we get a recliner and a coffee table up in the Rood Loft?” I asked Father Philip.  “Oh,” he smiled, “I guess you haven’t heard the story about our anchoress.”

But let me back up a bit.  I was a seminarian at the time, and a member of the congregation and an altar server at Pusey House.  Pusey House is technically not a church, but a “house of piety and learning,” and it’s the chaplaincy for high-church Anglican students at Oxford University.  It is housed in a beautiful neo-Gothic chapel, designed by the great Temple Moore, and the chapel is dominated by a life-size rood, a statue of Jesus on the Cross with St. Mary and St. John.  The rood is placed on a large platform called the rood-loft, a kind of balcony that goes across the breadth of the church about ten feet up, dividing the Chancel of the Church from the Nave.   If you’ve spent much time poking around old churches, you will know the Rood Screen, which is a smaller version of this—we had one in my last congregation that was maybe a foot wide.  But the Rood Loft at Pusey House was really a room of its own, 6 or 8 feet wide, with a tall stone parapet on either side.  I had been sent up onto it to retrieve some obscure liturgical implement, and that’s where I discovered the dusty recliner.

The Rood Loft, Father Philip went on to tell me, had been the home of Pusey’s resident anchoress for a few months a decade or so before.  An anchoress is a person called by God to a life of solitary prayer.  It’s a bit like a hermit, but while hermits tend to live in caves in the wilderness, anchorites or anchoresses live inside churches.  Back in the Middle Ages they were quite common, and Julian of Norwich, the beloved mystic quoted by Rev. Mary Thorpe in her sermon last week, was an anchoress in the Church of Saint Julian in Norwich back in the fourteenth century.  These days, they are much rarer.  In fact, as far as I know, the one from Pusey’s Rood Loft may have been the only anchoress in the modern history of the Anglican Communion.
Read more »
Posted by Rev. Mark A. Michael at 5:27 PM 1 comment:

My family and I were delighted to receive the call from God to come and join you at Saint Timothy’s.  I look forward to leading you during this time of transition as you say farewell to Father Brad, and prepare in time to receive the ministry of a new permanent rector.  It has been a special gift to be able to work alongside Father Brad for nearly a month.  It’s lifted a bit of the burden from both of us, and he has helped me to understand many different ways that God is doing wonderful things among you.

I can certainly understand why you have come to love him so much.  He is a man of great compassion and wisdom, and you bear the stamp of his leadership in many ways (as I’m sure you do also of your associate rectors and those who lead you before he arrived).  Father Brad’s insistence on God’s love for all people has shaped your active mission program and gathered together a deeply diverse and open-hearted congregation.  I know that you will all want to take time in the next few weeks to speak or write to him, thanking him for the way he has helped you to grow in faith and discipleship.  You will also want to spend time praying for him and his family as he discerns how to continue using his gifts in retirement.
Read more »
Posted by Rev. Mark A. Michael at 9:00 AM 1 comment:

What Do You Crave? A Sermon for Pentecost 10

“I am going to rain bread from heaven for you, and each day the people shall go out and gather enough for that day. In that way I will test them, whether they will follow my instruction or not.”

But it was a test.  Because every morning the manna came with the dew, with twice as much on Fridays so they could rest on the Sabbath.   There was no need to work for it and when kept overnight, it rotted in the pail.  So the Israelites had to trust God that He would send more of it the next day.  They had to rely on His promise that it was enough to keep them in good health and full strength.  They had to be patient with the lack of variety.