Ponder: "The Woman gave me, and I did eat"

When the Spirit descended in tongues of fire, it was to make the waiting group into the mystical Body of Christ in a way analogous to that in which the descent of the Spirit upon Mary at her Annunciation had formed the natural body of Christ in her womb. Nevertheless, although the Mystical Body came into being by this new descent of the Spirit, there was not a new incarnation, Christ was not becoming man a second time, he was not assuming a new nature; the human nature which he had taken from his mother, in which he had died for our sins and risen again for our justification, was being made present under a new mode. There are not, strictly speaking, two bodies of Christ, a natural and a mystical, but one body of Christ which is manifested in two forms.

Nor does the story end here, for that part of the Mystical Body which is on earth needs to be continually nourished and sustained, as Christ’s natural body did before its glorification. It is through the Eucharistic Body of the Blessed Sacrament that this takes place. Here again, there is not a new incarnation, but in the Eucharist the human nature which Christ took from his mother is made present in yet another form, a form through which that part of the Mystical Body which is still in via on earth is repeatedly sustained and renewed.

Ponder: "A community you cannot curate."

"One of the reasons the Church community can prove so challenging is that it forces those in it to share their pew with those whose paths they might never otherwise cross. People with clashing political views; people who have a wildly different experience of God that bears no relation to what you know; people who take exchanging the Sign of the Peace as an opportunity for a firm handshake, eyes lowered, or a full-on bear hug. Every Sunday, we are told to queue up for bread and wine with whoever happens to have walked through the heavy wooden doors at the back. In a society in which membership is falling not just in churches but in trade unions and political parties, the Church presents a challenge: come be a part of a community you cannot curate. It can be awkward and uncomfortable. It is often beautiful."
Madeleine Davies, "Those Who Applaud the Decline of the Church Will Miss it Once It's Gone."  politics.co.uk. 31 May 2016
Posted by Rev. Mark A. Michael at 10:44 AM No comments: 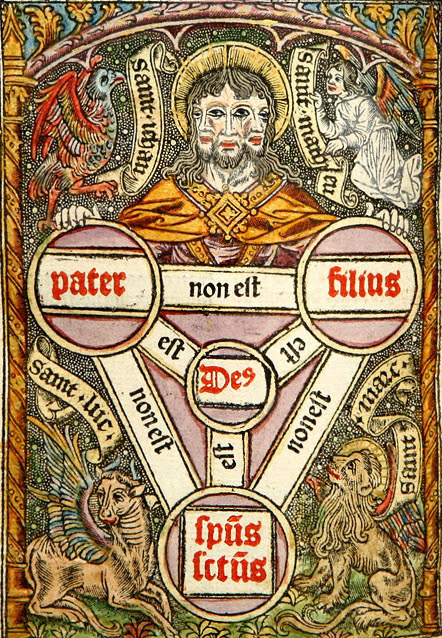 In the first year of seminary, my classmates and I were sent out a few Sundays to preach in local congregations.  I drew the short straw, and was assigned to a Family Service in a rural Cotswolds village on Trinity Sunday.  The assignment was to say something orthodox and meaningful in about five minutes, and the core audience was a dozen elementary school children.  Well, I mustered my full energies, and most of what I was learning in my class on the church fathers, and put together a plan, which involved a circle dance and some half-digested fifth century Greek theology.

I was feeling rather confident about my impending oration, and on the Saturday before Trinity Sunday, over breakfast after Mass, I announced to the congregation at Pusey House Chapel that I’d happened upon a way to explain the Trinity to kids.  Father Philip frowned over his teacup, looked me directly in the eyes and said bluntly: “If you think you have explained the Holy Trinity, young man, then clearly you’ve got it wrong.”

My late father had a personality that could fill a room.  We come from a family of storytellers, of gregarious men.  But Dad was unusually gifted. He worked for years as a hardware salesman, which helped him learn to feel comfortable relating to many different kinds of people, and finding just the right topic for small talk.  It made me smile to watch what would happen when he walked into a family reunion, a wedding reception or coffee hour after church.  People would immediately walk in his direction, smiles would break out, the room would grow louder and more animated as people began to speak up.

Some people have this kind of social pull because they have to be center of attention. They dominate conversation and cultivate eccentricities that make them stand out.  But aside from being able to tell a joke really well, there wasn’t much that stood out in the way dad presented himself to others.  He didn’t interrupt or compel, but was genuinely interested in other people.  He was able to draw them toward others, to bring out what was best in people.  You might say that his presence lifted everyone else, that he infused a kind of power into gatherings that made them altogether different than they would be without him.
Read more »
Posted by Rev. Mark A. Michael at 3:47 PM No comments: