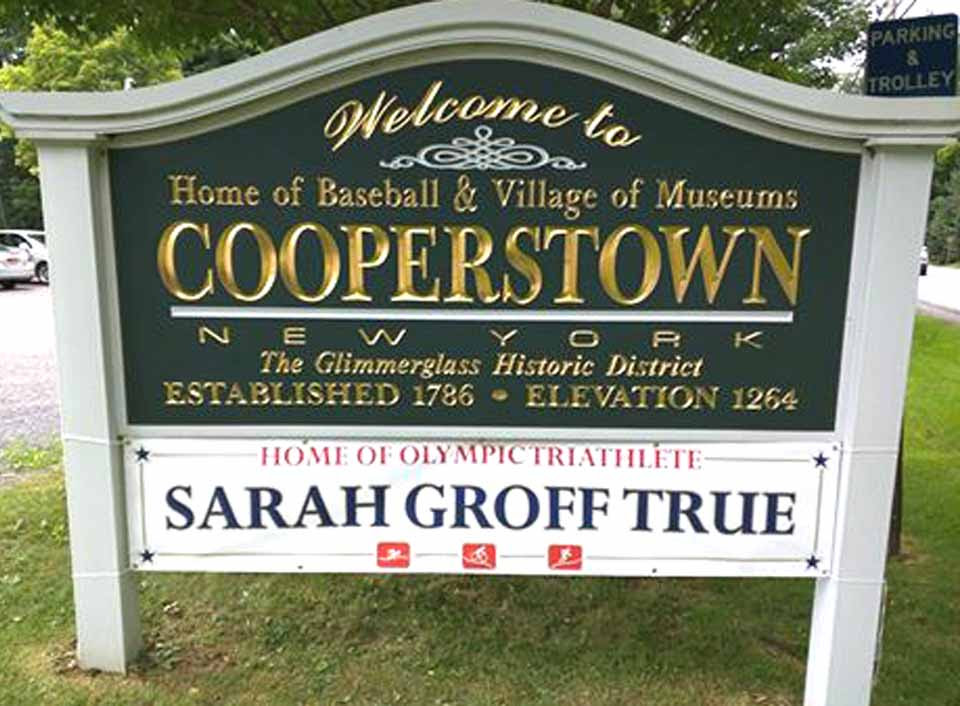 For a few days back in 2012, everyone in Cooperstown, New York had Olympic fever.  Team USA banners hung in all the shop windows, people wore Olympic buttons on their lapels.  The Chamber of Commerce sponsored a watch party and there were drink specials in the local bar.

We were all so excited because Sarah True, one of our own, was going for the gold.  Sarah was then America’s leading triathlete, and she had grown up in our village of 2000 souls.  Her parents still live in town, working at the local hospital.  Sarah had swum across the Lake on the edge of the village when she was 14, and competed on the high school track team.  Her old coaches and babysitters could remember how it was when she was just so tall.

In the end Sarah finished fourth, ten seconds short of a medal.  But when she finally made it home, we paraded her down Main Street as a hero, with firetrucks and the high school band, proud as could be that one of our own had achieved something so incredible.

Behind our excitement was a sense that Sarah was carrying a little of all of us into her great moment before the eyes of the world.  Some people felt they had helped to form her for this moment, for others her triumph was showing us just what could be possible for a kid from a little town in upstate New York.  We had a little share in her glory, and for one unique moment, that was a thrilling thing.
Read more »
Posted by Rev. Mark A. Michael at 1:00 PM No comments:

The 'Bounds of Habitation' and the Whitetail Invasion 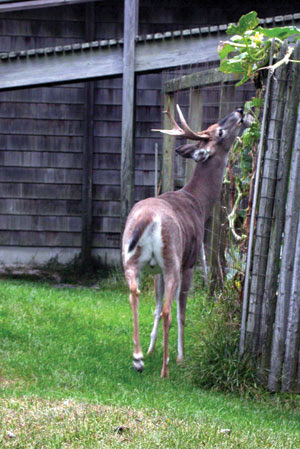 From my In the Sound of the Bells column in the May 11 issue of The Potomac Almanac.

After last week’s spot of yardwork, I feel like a real permanent resident of Potomac.  I now have a deer fence.  A “heavy duty” deer fence, to be precise, no mere agglomeration of netting and iron stakes, but a 7.5-foot-tall fence, its posts sunk deep into the ground, bound by high tensile wire top and bottom, staked every foot into the ground.

I’ve been wanting to plant a raspberry patch for years, and we identified a great spot in the backyard.  I researched the varieties I wanted to use and worked out a plan for a raised bed.  But if it would all be for naught if I didn’t find a reliable way to keep out the local wildlife, if the saucy, bovine creatures that saunter through our yard and the woods around us really deserve the name. Last Thursday was the National Day of Prayer. US Presidents have designated days of prayer, fasting and thanksgiving since the very beginning of our republic.  Our earlier prayer books had liturgical forms for these occasions, which were once quite prominent and numerous.  The National Day of Prayer, as an annual, recurring spring event is relatively modern, though.  It was resolved by Congress in 1952, in the dark days of the Korean War, at the urgent prompting of then young and dynamic evangelist, Billy Graham.

Prayer services for our nation and its leaders are held across the country on this day, including sometimes in the White House and on Capitol Hill.  I’ve participated in at least one ecumenical service for the day, and at Evening Prayer last Thursday at Saint Francis, we included a petition for the President and the Congress, nodding to the occasion.  Our leaders need our prayers, especially at times of great change.  It’s surely a good thing to gather people of different creeds and traditions to ask God for wisdom and courage for those who face such daunting challenges.

But this year’s National Day of Prayer will be remembered for something else as well.  At the White House event marking the occasion, President Trump announced his decision to sign an executive order directing the IRS not to enforce the Johnson Amendment, part of the US Tax Code.  The amendment is nearly as old as the Day of Prayer itself, having been authored by then-senator Lyndon B. Johnson in 1954.  It also reflects a time when religion had a more prominent role in American public life.  The amendment essentially says that churches, like other non-profit organizations, risk losing their tax-exempt status if they endorse political candidates.

By a stroke of the pen, President Trump has given a wide berth for American religious institutions to dramatically expand their involvement in the political system.  To my mind, that’s a very bad thing.
Read more »
Posted by Rev. Mark A. Michael at 4:39 PM No comments:

To Make Something Good Together in the World 
Shortly after we moved to Potomac, our eldest son joined the local Cub Scout pack, 773, which is sponsored by Potomac United Methodist Church.  The pack our son had joined near our former home in Virginia was newly established, with just a handful of kids and a rather harried group of parent volunteers always scrambling to pull things together.  It’s been exciting to be part of a much larger pack here, with a really talented and committed group of leaders and an impressive variety of activities.

We were expecting that the Pinewood Derby at the pack here in Potomac would be pretty special.  But nothing we had seen yet quite prepared us for the event that unfolded a few Saturdays ago in the United Methodist Church’s Parish Center.

The Pinewood Derby isn’t quite as old as scouting itself, but it goes back over sixty years, when a scoutmaster in California decided that his charges weren’t quite ready for the then common project of constructing cars out of soapboxes to ride in down a hill themselves (these were the days before soap came in plastic wrap and people worried much about liability insurance).  The scoutmaster’s idea was to have the boys to whittle or cut a car out of a small piece of pine, to nail on some simple wheels, and then to race the cars down an inclined track.
Read more »
Posted by Rev. Mark A. Michael at 10:28 PM No comments: