Praying the Passion with St. Bridget: A Holy Dying 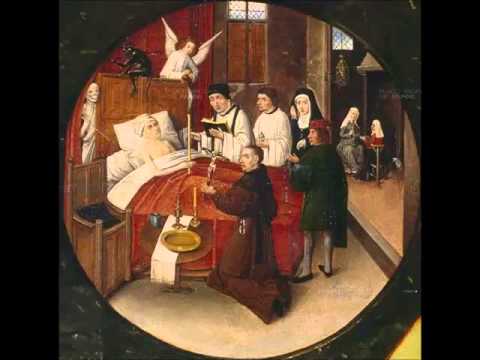 Then Jesus, crying with a loud voice, said, “Father, into thy hands I commit my spirit!” And having said this he breathed his last.  St. Luke 23:46

Several of the Fifteen Os also make mention of a particular aspect of discipleship that was especially important in St. Bridget’s time, ending life in faith and trust, having what Jeremy Taylor famously described as “a holy dying.”  As she meditates upon the end of Jesus’ life, St. Bridget is also inviting us, as does the final stanza of one of the Victorian passion hymns, to “Learn of Jesus Christ to die[1]”

In her concern with a holy death, in part St. Bridget reflects the reality of her times.  She was surrounded by people, all of them baptized Christians, who died in unexpected ways every day.  An epidemic struck a village, an army laid siege to a town, a fire swept through a city, and thousands would die.  People lived perilous lives, and unlike the reality in the Western world today, there were very few means of effectively blunting the pain, so that most people were conscious and fully aware of death’s approach.

Life, the church taught and taught often, should have a sacramental end.  One’s sins should be confessed, the body should be anointed, the last sacrament should be consumed, the viaticum, they called it, the food for the last journey, out of this life and into the embrace of God.  People usually made wills on their deathbeds, children and neighbors were summoned to receive parting words of instruction or long-desired reconciliation.  Last words were recorded, often treasured as a valuable summation of the meaning of one’s life.

This intense focus on the time of death had been an important part of Christian piety before St. Bridget’s time and it continued long after.  I was reading last week about the writings of the great 17th century Anglican spiritual writer, Jeremy Taylor and was surprised to read that of his two companion books, Holy Living and Holy Dying, it was Holy Dying that sold far more copies in his own lifetime.

There is Biblical precedent for this intense concentration on the end.  The Book of Genesis closes with an extended deathbed scene in Egypt, where Jacob is surrounded by his twelve sons, offering parting blessings and words of wisdom.[2]  The last words of Samuel[3] and David[4] are recorded, and Deuteronomy is really Moses’ last will and testament.  But above all, the passion and death of Jesus are set down for us in such great detail so that we can understand how a faithful life can come to a blessed end, even when beset by an overwhelming ordeal.

Today, of course, few of us like to think about our own deaths.  Occasionally, I will happen into a group conversation about how “we would like to go.”  Most people say they’d prefer to just go to sleep and not wake up again, that they fear suffering, don’t want to trouble anyone.  Death is an inconvenience, something that must be gotten through, certainly not something they have thought about doing well or poorly, something that should best be faced with careful preparation and support from others.

I usually point out in such conversations that the church has long prayed that God spare us from a “sudden death,” a death we didn’t notice or prepare for, drifting off into the next world.

This is in part because we believe that death is a perilous time.  One of St. Bridget’s prayers asks that Christ have mercy on us “at the hour of my death when my mind shall be troubled and my strength fail.”  Another mentions death as a time of trials, beset by terrors and pains.  As our own physical powers fade away, we are in danger of succumbing to doubts and fears.  Unless we have trusted fully in God’s grace, and are living in the strength He supplies, we may not be strong enough to push on and resist temptation to the very end.

And of course, no one comes to the hour of death free from sin, with an absolutely spotless conscience.  If we know ourselves honestly, we can trace the many ways that we have squandered God’s gifts and chosen our own destructive ways.  The deathbed is a place for confession, when we need what St. Bridget calls “true contrition and the remission of all my sins.”  The best way to prepare for this, of course, is to turn to God continually for forgiveness, to not let the day pass without turning to God in sorrow and in faith to receive renewal through His forgiving life.

And because after death comes judgement, St. Bridget’s prayers include a plea for God’s help in that final ordeal, when we must make answer for our lives.  Remember me, one of her prayers pleads, as you did the penitent thief, “not weighing my merits, but pardoning my offenses.”  Welcome me, says another, “like a pilgrim returning home.”  May your promise be confirmed even for me, though I am a sinner, because you have gone ahead to prepare a place for me.

Jesus is our model for a holy death, as He resists the crowd’s taunts to come down from the Cross and show His power.  He could surely have done that, but he chose to be steadfast instead.  From the cross, he settled the last duties of his mortal life, entrusting his mother to John’s care.  He had no sins to confess, but begged God’s mercy for the wrongdoings of others, departing this life, as one of the funeral prayers says, “in perfect charity with the world.”[5]  Jesus could say, in earnest, that all was finished, that He had given Himself completely to bringing God’s will to life.  In the end, like all his faithful followers, He still commended Himself into the Father’s hands, trusting in His grace to make all complete.

As in the models of discipleship I outlined in the last talk, these are things to bring to our own mind, as a pattern for our way of dying.  But we bring them also to His mind, we make a memorial of them, so that He would give us grace to do the same when our hour has come.

Over the next half hour, let us close our meditation time by doing something many of us very rarely do, thinking on our own death, and asking for God’s help to die in His faith and fear, as Christ did in such a perfect and final way.