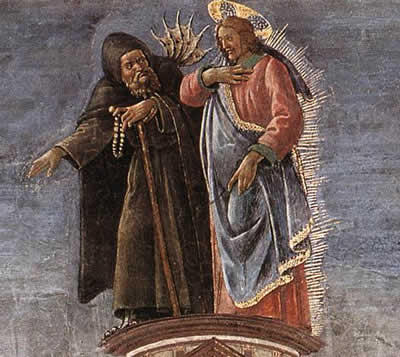 “Then Jesus said to him, ‘Begone, Satan! for it is written, ‘You shall worship the Lord your God and him only shall you serve.’”  St. Matthew 4:10

It was great to see last week that my college friend John has finally gotten engaged.  I found out the way the way you often do about these things when you’re my age, when a notice popped up halfway down my Facebook feed.  I haven’t seen John in two or three years, but he seemed about the same, his arm around a beautiful woman.  Both of them looked delighted, and frankly, a little relieved.

John’s all of 38 now, and after a conversation I had with him the last time we were together, I doubted that this day would ever come.  He was kind enough to put me up for the night in his apartment in Hell’s Kitchen the last time I was in New York.  John works in mergers and acquisitions at a big bank, knows a bit about everything, and has friends all over town.  Still no steady girlfriend, though.

“You don’t understand what it’s like dating here in the City,” John said to me over his plate of souvlaki.   A few months before he had signed up for Tinder, which was the hottest thing in dating technology at the time.  Tinder is sort of like internet matchmaking on steroids.  It sets up a date for you first thing in the morning by text message and you have an hour or two to decide if you’re in the mood for this option or if you’d like to try someone else instead.

John had lots of dates.  I expect he had turned down two or three to have dinner with me.
But he told me he just didn’t know what he was looking for.  Did he want someone who would bring excitement into his life, or the good mother for his children, or someone who fascinates him so much he wants to stay up talking all night? “I don’t know what I want, and neither does anyone else,” he told me.  “We want to commit but there’s always another option.  There are millions of beautiful, smart and successful women in this city but I don’t know how to find the one that’s right for me.”

I guess, somehow, John found a way to limit his options.  I expect he was partly exhausted by all that choice.  He was aware of how all those options cheapened the relationships he was developing.  He came see his place in the world more clearly, understanding that life only has so many years.  And of course, he truly loves this woman he will marry.  And we can only love by pouring ourselves completely into the relationship, giving this other person the first place in our heart.  To love is to “forsake all others,[1]” as the marriage vows say.  It is to limit our options so that we might say, “with all that I am, and all that I have, I honor you.[2]”

A commentary I read this week described what my friend has discovered now in this way: “Freedom is largely squandered, if exercised as a series of provisional commitments. In such a case, the mind, heart, and soul and the body’s work in the world are never constrained or fixed to some point of irrevocable commitment. No work is deeply engaged, no love profoundly embraced.” The author went on to describe a wise friend and mentor of his, a Carmelite priest who is also a gifted Latin teacher.  At fifteen, the course of his friend’s life was set.  “More than 50 years later, these three remain [for him]: priesthood, monasticism, Latin brilliance.” Says his teacher: “It’s amazing what you can do if you limit your options.[3]”

Jesus triumphed over the devil’s temptations by limiting his options, so that he might profoundly embrace His profound love for the Father.  To give Himself completely, Jesus needed to reject other possibilities for His life and ministry.

The temptation story comes at the very beginning of Jesus’ ministry, just after His Baptism, The Holy Spirit led Him out into the wilderness so He might wrestle with the calling He was receiving from God.  The devil places Jesus in a series of situations and invites Him to work miracles, revealing the power God had vested in Him.

Two of the challenges were not bad in themselves.  In fact, all three of them could have led Jesus to a ministry that would have made many people’s lives better.  He could have turned stones into bread, to feed His own hungry body and those of countless others.  He could have jumped from the pinnacle of the temple, to the wonder of the crowd, who would have acclaimed Him from the beginning as a miracle-worker.  He could not, of course, have bowed down to Satan—that is evil in itself.  But if Jesus had been given charge of “all the kingdoms of the world and all the glory of them,” think how wisely and justly He could have ruled.

But Jesus knew that He had been sent by the Father above all to die and to rise again, to redeem the world from sin and death.  This vocation would demand a humble beginning, a message proclaimed in a small place, disciples drawn from the common lot, ordinary sorts of miracles that invited faith without compelling it.  In pursuit of His ultimate aim, He would eventually feed the hungry and work miracles and someday He will rule over all things on earth.  In time, He would use His powers dramatically and reveal His glory to the world.  But His true goal was fixed before Him, and to seek it with His whole heart, this day He needed to say no. His final word to the devil is the sum of the message, “You shall worship the Lord your God and him only shall you serve.”  To serve God alone, He would learn to say no many more times in the ministry that lay ahead of Him.

Temptation, for us, as for Jesus, always presents its better side.

Every evil choice, the moral theologians say, is made for the sake of a lesser good.  It’s a disordered thirst for justice that makes us harsh with our neighbor, and we love the sweet taste of the second piece of pie, not its damaging calorie count.  “The woman saw that the fruit of the tree was good for food and pleasing to the eye, and also desirable for gaining wisdom.”  But she failed to notice who was inviting her to taste of it.  The devil is wily.  So often we see how destructive a choice will be for us only after we have consented to its benefits.

Temptation also deals in false promises of freedom, suggesting that our life will be more complete if we try a bit of everything.  “When you eat from it your eyes will be opened,” says the serpent, “and you will be like God, knowing good and evil.”  Temptation appeals to our imagined self-sufficiency and our cherished illusions of competence, that sense that in the end, we can handle it all.  Surely, you’ll be able to consume hours of alarmist news or trashy TV and still find it possible to quiet your soul enough to pray.  Surely, you’re spiritually grounded enough that if you play golf three Sundays a month you will still be able to hear God’s Word clearly and receive the Sacrament joyfully the one Sunday you make it to church.  Surely, you can indulge that little flutter of interest in your attractive coworker without tumbling headlong into an affair.

We like to think we can have it all.  We assume we will know when to stop, that our better nature will kick in when we really need it.   We fail to recognize how weak we really are, how inaccurately we judge things.  We fail to see how temptation overcomes us by exhausting us, by wearing down at our ability to distinguish between what is really important and what is merely interesting.

We are defeated, in the end, by distraction.

Sinners like us, we need a narrow path.  The only true response to God’s grace toward us is a love that can express itself only in irrevocable commitment.  There is really only one thing necessary, to love God by keeping His commandments.  True freedom comes only in His service, after we have renounced the devil and all His works.  With God’s help, each of us can find a way to love Him in and through the circumstances of the life in which He has placed us.  The greatest saints, you see are really like us.  They’ve just learned how to say no.  “It’s amazing what you can do if you limit your options.”