A Taste of What Could Be 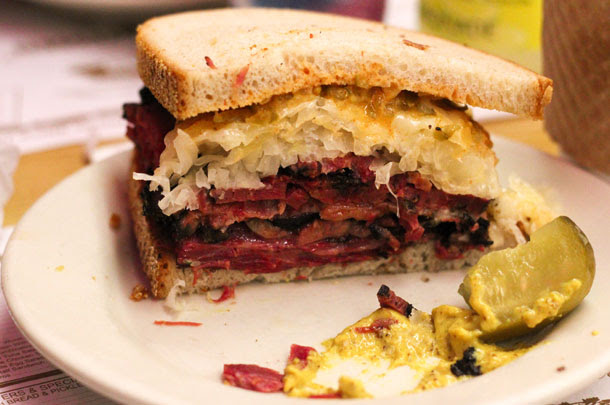 “This will give you an opportunity to testify… for I will give you words and a wisdom that none of your opponents will be able to withstand or contradict.”  St. Luke 21:13-14

The senior warden and I were having lunch a few weeks ago over at the Hunter’s Inn, and I asked the waiter if the reuben was any good.  I am, you see, a one sandwich man, and that sandwich is the reuben.  If it’s Friday, I’ll have the fish and, on occasion, the special.  But if I’m out for lunch, it’s usually a reuben.  If I’m to live here for many years to come, I need to figure out who serves the best reuben in Potomac.

So, I asked the waiter the important question: “is the reuben any good?”  And he was that rare bird, the waiter of probity.  He answered me, “Well, people like it.  But I’m from New York, and they toast it here instead of grilling it.  It’s just not the same.”

And I thought to myself, I know just what he means.  Because I, too, have been to New York, even unto Katz’s Delicatessen on the Lower East Side, where they make reubens of Biblical proportion.
Katz’s has been around for a long time.  Their slogan, used continually since the forties, is “buy a salami for your boy in the army.”  And when they say it, it rhymes.

They’ve got liverwurst sandwiches and big plates of pickles and they brew their own strong brown beer.

But it’s the reuben, hand carved from colossal hunks of pastrami, that keeps the crowds lined up out the door.   The meat, tender and full of flavor, the sauerkraut and the cheese just right, and grilled, for heaven’s sake, not toasted.  It’s one of the great pleasures of this life to eat a reuben at Katz’s, most particularly if you are a one sandwich man.  And once you’ve eaten one, you don’t need to eat anything else for at least twelve hours.

But here’s the problem, the one that I share with the honest waiter at the Hunter’s Inn.  Once you’ve had a reuben from Katz’s, you can’t ever really enjoy any other reuben in quite the same way.  You now understand the full potential of the sandwich, and the flaws of the ordinary one stand out ever so clearly against it.  There is one sandwich in your hand, but the taste of another lingers somewhere in the deep recesses of your mind, a taste of what could be, if only things were different.

In today’s Gospel lesson, Jesus looks upon the Jerusalem temple, probably the grandest thing he and his followers had ever seen.  And He tells them that, for the sake of God’s greater purposes, it too will fall, so that something even more magnificent can take its place.  Jesus has seen the glorious completion, you see, God’s final plan has been unveiled to Him.  Ranked beside it, even the temple bright with its golden ornaments seems partial, flawed, certain to fail.

Today’s reading is part of what the scholars call the “apocalyptic discourse” in Saint Luke’s Gospel, when Jesus told his disciples how it would be at the end.  Like the prophets before Him, Jesus describes the world turned upside down, the stable things of life broken to pieces.  Wars, famines, catastrophe, lay ahead.  Nothing is certain, nothing will last apart from God’s promise that, in the end, He will reign over a new heavens and new earth where “righteousness is at home.[1]”

When situated beside that hope, even the greatest or most dire of earthly circumstances pale in comparison.  These words are meant by Jesus to reassure His followers that the hardships they will face are not signs that God has abandoned them, or that the Gospel is untrue.

But they also serve as a necessary check to unreasonable expectations.  The temple was the great project of its age, the crowning masterpiece of Herod the Great, who had founded a new line of Jewish kings. For many Jews of Jesus’ time, the simple existence of such a splendid building was itself proof that God would always defend Israel from harm.  So long as the sacrifices were offered every morning, they could not fail.

But Jesus knows otherwise.  Among those who heard him, some would see the Roman armies destroy it completely in forty years’ time.  No majestic building, no system of government, no military juggernaut, no golden age lasts forever.  We are fools if we put our deepest trust in any human project.  Jesus’ tale of woes to come urges us to place our hopes in God alone, to be mindful of our own sins, to push on, but with humility, deeply aware of the fragility of all human projects.

The past several months have been an apocalyptic time in the life of our republic.  Much of the rhetoric used in the days leading up to the election described a nation in crisis, unable to address our deepest economic and diplomatic challenges. Time Magazine last week showed the two presidential candidates holding up a sign that said “The End is Near.”  It was, of course, a joke about how bothersome the robocalls and television ads have been.  But did it not suggest something more, that our whole political system and our shared culture is unravelling, and that such candidates as these are symptoms of a terminal illness?

We have elected an unexpected president, in what pundits are calling the greatest upset in American history.  We are deeply divided.  Some of us are joyful about the prospect of a new leader with fresh methods. Others of us are frightened of the things Mr. Trump has promised to do and the way he will respond to events he cannot predict or fully control.  His could be the kind of presidency that changes the course of history.  Perhaps Mr. Trump will make America great again, and perhaps this is the beginning of the end of our experiment.

But we look ahead.  In the midst of the chaos and uncertainty of this life, we scan the horizon for He who will come, as promised long before, like the sun of righteousness, rising with healing in His wings.  We are citizens of a true and lasting city, one not of this world’s making.  And as we worship the Lord this day, and share in the gifts of His grace, we taste of the good things of the age to come.  Empires rise and fall, rulers come and go, but God’s kingdom stands forever.  Our opening hymn had it just right:
Fading are the worldlings’ pleasures,
All their boasted pomp and show;
Solid joys and lasting treasures
None but Zion’s children know.[2]

I had a message early Wednesday morning from my friend Madeleine Davies, a reporter for the Church Times in London.  She wanted to know what I thought the church should say in response to the election, and her editor set her a deadline of 8:00 in the morning, Eastern Time.  I was a little hazy, having been up past two watching the returns, hoping to be sure who had really won the thing.

What I said to her was that the Church would be speaking into a fog of fear and resentment after this election, and that it would be hard for anyone to hear what we need to say.  And though that might be true in some ways, I think it was a mistake for me to say it.  I was forgetting the words of Jesus in today’s Gospel lesson and the testimony of the faithful repeatedly in ages past.  These are the times when the church must speak. In the midst of the chaos, through that fog of fear and resentment, Christ has promised us, “You will have an opportunity to testify… I will give you words and a wisdom that none of your opponents will be able to withstand or contradict.”

Because we Christians have tasted of the glories of the world to come, this is our moment to tell an anxious world some truths of “Zion, city of our God.”  Our true homeland is a place of shelter for the poor and weak, where no one is trod under.  All nations, tribes, peoples and languages gather at the feet of our king, reconciled by the blood of His cross.

This is our day to call a divided nation to peace.  We can model ways of listening to one another, so that we might discover the things we all value and need.  It’s our time to advocate for the defenseless, speaking out against cruelty of any kind.  But it’s also a time to show respect for a man to whom God has granted authority, and to pray for him. Donald Trump is neither savior nor antichrist.  He is a flawed man, who will soon begin a task that is beyond his capacities, as it is beyond the capacities of anyone else who dares to assume it.

In the midst of our common life, lived in prayer and self-giving love, we offer a foretaste of the feast to come. The sweetness of that feast is a sign of hope to those who fear and a call to humility for those who rejoice in earthly triumph. Today, more than ever, America needs the church to be the church.  This is our “opportunity to testify.”