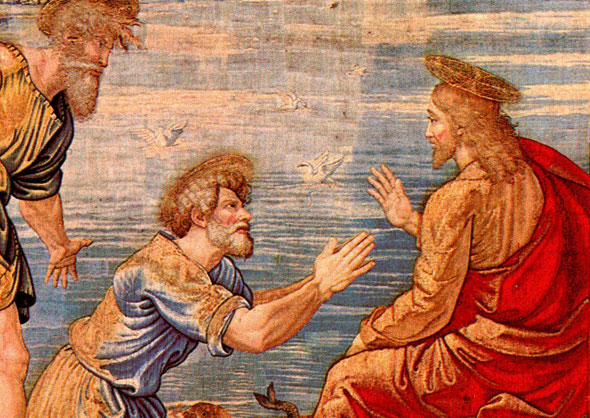 “Behold, he goeth before you into Galilee; there shall ye see him.”  St. Matthew 28:7

One of the special things about settling in the DC area for Allison and me is spending time in the city where we fell in love.  Back in the summer of 2003, I had just finished my studies at seminary and was getting ready to begin as a teacher at a boarding school near Hagerstown.  Allison was a public policy student completing her mandatory student internship at a organization on Capitol Hill.  I’d meet her after work in the grand hall of Union Station and we’d head off to one of those free concerts at the Kennedy Center or we’d sit and talk in one of those pleasant little parks near the Capitol, or share a meal in that most exotic and romantic locale, the food court in the basement of the train station.

Sometimes, when we’ve got the kids in the backseat and we’re headed off to a museum on the Mall or to see a friend who lives across town, we’ll drive by one of these places and tell them a little about what it meant to us then.   So much that has happened since then that we never expected, but many of the good things we do enjoy now were planted there.  Going back to those places, we fall in love again, or at least we understand something valuable about the love we share now, something we can only discover there, where it all began.

The story of the resurrection of Jesus is a strange one.  There’s a mystery at its heart, Jesus dead for three days, raised by the Father in ways that lie beyond our understanding.  There’s lots of drama, earthquakes and angelic visitors, disciples rushing to and fro.  But one of the stranger things in the story is that when He has been risen, Jesus commands His disciples to go to Galilee.[1]  They receive this direction twice in our Gospel lesson—first from the angel and then from Jesus himself.

If you haven’t been driving around Palestine lately, you might not recall that Galilee is a long way from Jerusalem, where Jesus was crucified and where he rose from the dead.  It’s around 90 or 100 miles—like the distance from here to Richmond.  It would take them nearly a week to walk there, which probably explains why the command had to be repeated, to be sure they really understood it.

But why Galilee?  After all, if the most exciting thing in the whole Jewish people had just happened, the perfect audience for the announcement was already gathered right there in Jerusalem.  Jesus rose again in the middle of the Passover holiday, when believers from all over the world jammed into the city.  All the religious officials were there, the Roman governor with his regiment.  It would have been the perfect opportunity for Jesus to reveal Himself right in the middle of it all.  He could have stormed into Pilate’s audience hall or the temple, convincing all doubters that He was indeed raised from death and displaying the dramatic power His resurrected body now held.

But instead, He sent His disciples to Galilee, to the same backwater region where He had first met them three years before.  Maybe He did it because Galilee was a religiously diverse area, the perfect backdrop for his eventual command, later in this same chapter of St. Matthew’s Gospel, that His apostles make disciples of all nations.

But really, I think He did it for the same reason my wife drive around those one way streets around the Capitol.  Galilee was the place where they had first learned to trust Jesus, where they had committed themselves to Him.  And when they get back home, in a series of lessons we will be reading over the next few Sundays, they do lots of the same things they had done at the beginning.  They go out on a boat and fish, and Jesus works a miracle that shows he has been sent by God.  They share breakfast along the beach again, and He calls them, asks them if they will follow Him to the end.

It's different now, of course.  He’s been raised, which proves that all His promises were true.  They aren’t afraid anymore, because they know that if death cannot hold him, nothing anyone else can do will ultimately be able to harm them.  Many of His sayings that had been confusing before fall into place now, as his resurrection is that final piece in the puzzle that helps His mission fit together and finally seem complete.  They go home, but it’s different this time, and when He pours out His Spirit on them in a few weeks’ time, and they preach to those crowds back in Jerusalem, they are changed men.

In a crucial sense, Jesus’ resurrection stands apart.  It is a sign in His flesh of God’s love and faithfulness.  But it’s not just something that belongs to Him.  He gives a foretaste of it in the life He shares with all His disciples, all who follow Him.  Something in those eleven men was renewed in the days they spent with Him in Galilee.  They could point to His glory and power because they could trace its influence in their own lives.

We too, who have been baptized into His life, who love Jesus and try to follow Him, we also have a share in this resurrection.  “Our life is hid with Christ in God,” that how Saint Paul says it in today’s Epistle lesson.  What belongs to Christ is passed on to those who are “hid” in Him, who share a true but unseen union with Him in this life and the world to come.

Part of what that means is that we too are meant to show the power of Christ’s resurrection in changed lives.  Saint Paul begins this section of Colossians about believers being “hid with Christ in God,” but soon enough he’s talking about being patient with difficult people, trading greed for generosity, forgiving our enemies, having compassion on the weak, giving thanks to God in all things.  A resurrected body, being hid with Christ in God—these can seem like remote and abstract things.  But we know all about how hard it can be to forgive someone who has wronged us or to patient with our troublesome neighbor.  Deep compassion, a humble spirit: these are character traits that Christ wants to form in us.  But this kind of life also depends on a deep trust in God, as it did for those courageous apostles.  These habits of the soul can only really unfold in us when we know we have nothing to fear, that Christ who loves us will never abandon us now.

The Easter message for us, as for those disciples, needs to be taken home for its full meaning to be understood.  It needs to shape the way we speak with our families around the dinner table today, the decisions we will make in the office tomorrow.  If ever there was a Christian doctrine meant to be applied, it must be this one.  Jesus is risen and that changes everything.  But that universal change begins in the lives of people like you, who go home today and see that nothing is quite the same again, since He who was dead now lives.


[1] Thanks to Scott Hooeze for this insight.  “Easter Day A,”  The Center for Excellence in Preaching.  2017.  http://cep.calvinseminary.edu/sermon-starters/easter-day-a/?type=the_lectionary_gospel
Posted by Rev. Mark A. Michael at 10:12 PM