The Frog Hollow of Palestine 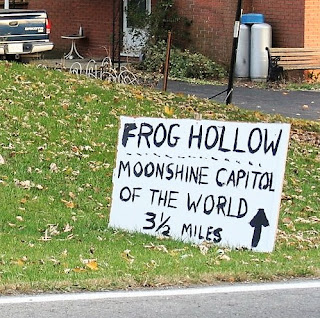 “When the Samaritans came to him, they asked him to stay with them; and he stayed there two days. And many more believed because of his word.”  St. John 4:40-41

I’ve seen the sign on the left-hand side of the Harper’s Ferry Road: “Frog Hollow, the Moonshine Capitol of the World.”  I think it’s a bit tamer down in the Hollow these days than it was during the height of Prohibition, when a man would sit watch on the bridge on a summer’s night in case a revenue agent came creeping down the road with an axe and an ultimatum from the IRS.

Until it burned down a few years ago, though, the center of community life in the hollow was the Mad Dog Saloon.  They say the floors were dirt and they traded in canned beer out of a Coleman cooler, when the locally produced wares weren’t being passed around.  Saturday nights were punctuated with ambulance calls, when one of the hollow boys was wont to get a bit dramatic with the cue stick.  I lived for two years in Sharpsburg, just five miles away. But I never had the guts to cross the threshold of the Mad Dog and see if all the stories were really true.

They were hellraisers down in Frog Hollow.  That’s what my grandmother would say.  Foul-mouthed, hard-drinking, suspicious of outsiders, the kind who threw fists and asked questions later.  There aren’t any churches in Frog Hollow, or Rotary meetings, no afternoon teas to talk over rose varietals.  People in the surrounding communities knew to keep their distance.  “He’s from Frog Hollow.”  That’s all that needed to be said to take the measure of things.

Jesus “had to pass through Samaria,” Saint John tells us, as he made his way back home to Galilee.  Jesus had made his first foray to Jerusalem, a thoroughly disappointing venture.  He had been scathing in his attack on the corruption at the temple, and his sermon to one Nicodemus, “a teacher of the Jews,” had left the poor fellow quite baffled.[1]  There was only really one way back to Galilee, through the Samaritan territory, inhabited by the Jews’ ancient cousins, with their heretical beliefs and strange customs.

Jesus had to pass through Samaria, but surely, he didn’t have to stop in Sychar.  The name of the community meant either “the town of the liar” or “the town of the drunkard.[2]” I wonder how it ended up with that name.  The settlement was just over the hill from Shechem, recorded in Genesis as the site of a rape followed by a grisly mass murder.  When the disciples had gone off to look for some food, the local welcoming committee came out to meet Jesus: a notorious woman, the wife of five men in turn, now living with a sixth.  Sychar: the Frog Hollow of Palestine.

In the way Saint John unfolds the Gospel story, by this point Jesus is a prophet with one miracle to his credit and only a handful of followers.  He’s coming off a failed debut in the holy city.  If there was ever an unpromising place to start up a spiritual conversation, Sychar would be it.

But of course, Jesus engages the woman at the well, asks her for a drink.  And then He probes deeper, speaking of a thirst of the soul, a desire to know God, to experience His love, to obey Him with joy.  We all have this thirst and spend a lifetime looking for ways to slake it.  And God has sent me, Jesus tells her, to bring living water, a fountain gushing up deep inside you that never fails.  “Do you want this living water?” He asks her.  Can you recognize that I am the Messiah, the Christ, the Redeemer promised long before?

And of course, the woman does want the water and she can recognize Him, and she responds to His word with a bold enthusiasm like nothing Jesus had seen before.  Nathanael wants to know Jesus’ qualifications before he will meet with Him.[3]  Nicodemus is just confused.  But this woman of Sychar runs off to tell everyone that she has met the Christ.  She calls all the neighbors to run and meet this man who has revealed everything to her.  And they also want to hear more from Jesus, they beg him to stay for two days.  “We too have come to believe, they say, “and we know that this is, indeed, the Savior of the world.”

The fields are white for harvest, Jesus told the disciples when they returned to find Him speaking to the woman.  God has prepared those who will hear us in advance, and some who will hear us most clearly and respond with the greatest courage are those we would never have expected.  In the Holy City they turned their backs, but here in the “town of the drunkard” faith abounded.  A commentator described it this way: “It seems that our Lord never slept in Jerusalem, but he tarried two nights in Sychar.  Jerusalem excommunicated and outlawed Him, Sychar kept beseeching Him to abide there permanently…The Samaritans prove to us that we may find a great opportunity to sow for Christ among people whose receptiveness we would never suspect.[4]”

Let me tell you about the one family in Frog Hollow I came to know when I lived in Sharpsburg.  Both of them had grown up right in the heart of the community.  One of Helen’s[5] relations had run the local store back in Prohibition days, the one investigated by the police because it sold astounding amounts of sugar.  You wouldn’t believe how many pies these women bake, her grandfather had assured the sheriff, surely not an ounce is for whiskey.  Harvey[6] had been a regular hell raiser back in the day.  He could tell stories about cars that ran like greased lightning and taken his share of bruises.  He’d broken plenty of hearts before his eye fell on Helen, who by some mercy of grace had taken to singing in the choir at Saint Paul’s on a Sunday morning.

The rather imperious priest refused to marry them until after Harvey had been instructed in the faith and baptized.  He’d hardly darkened the door of a church in his youth, had certainly never considered the claims of Christ and the new life He brings.  But Harvey listened to the man, and something in those words took root in his heart.

If you go to Saint Paul’s this morning, I can guarantee you that Harvey and Helen will be in their pew.  They’ve held the congregation together for generations, served in turn in nearly every role.  You couldn’t find people more honest, reliable, or generous.  Harvey has served as a crucifer for as long as anyone can remember, though he doesn’t think himself worthy to handle the chalice.  I’ve hardly seen a man more naturally pious and reverent, gazing with love at the Altar, clasping those rough hands in prayer.  He knows the joy of forgiveness, and a peace unlike what the world can give.

They still live right in Frog Hollow, almost in shouting distance of the Mad Dog Saloon.  But in their hearts they belong to the Savior of the World, precisely because someone had faith enough “to sow for Christ among people whose receptiveness we would never suspect.”

As we’re exploring in the adult forum this Lent, there are challenges in sharing the Gospel with the millennial generation, whose strange ideas and odd social customs confound many of us.  We live in a community that has experienced significant demographic change, full of people who aren’t like us. They didn’t have the advantage of solid Christian upbringings, some seem to live only for the pleasures that money can buy.  God only knows what happens when they lock those gates at the end of the driveway at night.

But Jesus made an evangelist of the most notorious woman in Sychar.  He made a crucifer of a Frog Hollow hellraiser.  And I expect He has more than a few surprises in store for us, when we go out to labor in the fields white for harvest right out those doors.