From the Field into the Choir: Remembering Grandpap 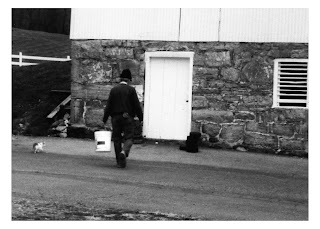 “Man goeth forth unto his work and to his labour until the evening.”  Psalm 104:23

I have an image of my grandfather fixed in my mind.  If I also live to be 88, I expect it is how I will remember him.  He is headed out to a day’s work, dressed in a tattered red hooded sweatshirt and blue jeans streaked with brown, clothes that even after careful washing smell partly sweet like silage and partly pungent like something else.  He walks with a determined stride and a broad grin, and he’s whistling, “Buffalo gals, won’t you come out tonight and dance by the light of the moon.”

Why wouldn’t he be whistling and smiling?  He was going to work.  And Grandpap loved to work, found it deeply satisfying.  He pursued his work with the intensity that some men reserve for pleasures that are far less healthy and useful.

He was able to work each day in a place that he had always known and loved.  My grandfather was born in the house where he would eventually die, even in the same room.  He learned about crops and cattle from his father, and spent decades tilling the fields he had wandered as a boy.  He loved these pastures and crop fields, because they contained the story of his life.

Anyone who ever spent much time working with him will know that Grandpap had a specific method for doing each task around the farm, methods that sometimes involved using improvised tools that looked quite unpromising to the outsider.  Sometimes this was because he couldn’t bear to throw anything away, but more often these specific methods were related to some detail of the landscape or the farm buildings.  He had tested out alternatives, and time and experience had shown what was best.  There’s a kind of patience and humility in this, a willingness to accept what has been handed on to you with gratitude, adapting to it instead of forcing your will on it.

Farming also allowed Grandpap to use his talents, his natural intelligence and tenacity.  I know that he could have been a very gifted doctor, or professor of animal science, maybe even a stockbroker.  But as his life unfolded, it was clear that he was called to be a farmer.  He poured all he had into being the best possible farmer that he could be.  He studied the farm papers and loved talking over prices and methods with the other old guys at the auction.  He delighted in getting a good deal, and could recall decades later how much he had paid for each piece of machinery in the barn and how much corn or beef sold for in a given year.

He also found success in his work and stability, and that meant a great deal to a man who had lived a pretty hardscrabble youth, when the threat of losing the farm hung over his father.  Grandpap experimented with new methods in cropping, developed connections with the Baltimore markets, took risks, made careful plans.  He succeeded as a family farmer during the decades that saw the collapse of that honorable pursuit throughout our region, because he valued hard work and delighted in doing things well.

Work is natural to man.  It is the way that we fulfill our role in God’s order of the natural world.  This is the pattern traced in the Psalm I read to you a few moments ago.  Birds are made to nest in the trees, lions are made to prowl in the darkness, and we humans are made to work.  The first man, made from the ground, was sent by God to tend the ground, to till and to keep.  Work allows us to use our gifts, and enjoy the satisfaction of making a contribution.  Good work makes us better people and gives glory to God.

But we are not made to work forever.  Our deepest and final vocation is to rest, to enjoy the good things that God has provided, to grow in our love for God and for those people he has placed in our lives.  Work must eventually be set aside for the sake of taking up the pursuit of things that are even more fulfilling and meaningful.

That was something that I noticed about my grandfather early in life.  He loved to work, but he set aside his work to be deeply involved in the life of his family, church and community.  He sometimes took a little ribbing about emphasizing the bottom line.  But if a farmer’s real objective was to make as much money as he could, he wouldn’t take off every Sunday, or set aside Saturdays to go to band concerts, or stop work early on a clear fall day to watch a soccer game. He wouldn’t come in from the hayfield on a dusty Saturday night to stand by the piano to rehearse the tenor line for Sunday morning’s choir anthem.

I remember reading an Advent meditation that he wrote years ago for a booklet at Saint John’s.  He talked about walking around the barn at Christmastime and thinking about what it must have been like for Mary and Joseph in the stable at Bethlehem.  Men who just want to accumulate wealth don’t meditate while they’re throwing down the hay bales.  But Grandpap did.  There’s faith in taking time off, trusting that God can mind the farm while you tend to other things in your life that are really important.

Our Lord promised a blessed rest to those who love and trust in Him.  When the evening of life drew near, and work was set aside, He would take them to Himself.  He promised to raise them up from the grave to share in a new world without pain and sorrow.  Our text from Revelation describes that world,  a place where His faithful ones will serve Him in His temple.  They will worship Him, Jesus who died for our sins, and yet is raised up to share with us His victory over death. They will sing His praises forever.  It’s a kind of work you might say, but it brings no struggle and disappointment.  It still stretches us and uses our talents well, but it brings a new kind of fulfillment, an abiding peace and joy.

Today we send Grandpap, with our prayers, from the field into the choir. We entrust Him to God’s mercy for the road that lies ahead.   I like to think that He goes as he always did, with a determined stride and a broad grin.  He’s coming home, and whistling as he goes.
Posted by Rev. Mark A. Michael at 6:47 PM