Victory is Ours: A Sermon for Holy Cross Day 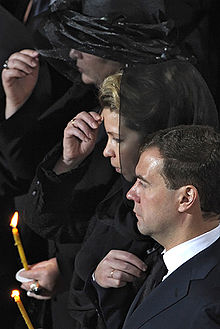 "The LORD has made known his victory; * his righteousness has he openly shown in the sight of the nations."  Psalm 98:3

As you might have noticed, just now I made the sign of the Cross over myself.  I do it quite often.  I sat down and counted this week, and discovered that in the usual course of celebrating the Eucharist on Sunday, I make the sign of the Cross not once or five or ten times, but 27 times, as well as making it over each of you individually with the wafer when you come forward to receive Holy Communion.  Making the sign of the Cross is a ritual that accompanies many different words and movements in the course of the liturgy, including nearly all the most important ones.  I use the Cross when I ask God to be with me in reading and hearing the Gospel, when I speak His word absolving your sins, when I bless the bread and wine, when I speak His blessing over all of you at the end of the service, and at quite a few other times besides these.

And of course, the Cross isn’t just here among us in the ritual action, we also worship facing a Cross.  The service begins when the choir and the sacred ministers come in, proceeded by a Cross—and we brought the beautiful jeweled one out of the vault to mark this special day.   There are crosses on the windows and the paintings, the arches and the plates.  The silver cruets we use at the Altar have crosses on their tops.  My vestments today are adorned with a half-dozen of them.  There’s one on the steeple, and the whole building, for that matter, is shaped like a Cross.

Now, if you’re new here, all these crosses are likely to strike you as rather odd, maybe as a kind of symbolic overkill.  Surely, we could mix it up a bit, couldn’t we?  What is it about the Cross that urges us Christians to plant it everywhere, to mark everything with it? What does it mean for us?

We might begin to answer that question by saying what it doesn’t mean for us anymore.  Because at first, the Cross wasn’t a holy symbol of any kind.  The ancient Romans, who were masters of psychological manipulation, had invented crucifixion.  It was a tool for frightening subject nations, a form of death so bloody and brutal that the mere threat of it could be enough to put down a possible rebellion.  They reserved it for the most dangerous criminals, and freedom from the danger of it was one of the most cherished privileges of their own citizens.  For the Jews of ancient times, it carried an added religious meaning, one of unconditional condemnation.  The Old Testament law decreed that whatever hung on a tree was cursed, and for them the Cross meant abandonment by God, the very opposite of holiness, life and peace.

But all that changed one springtime Friday afternoon when Jesus hung on a Cross.  This was a death He had foreseen and freely chosen, an act of obedience to the will of God the Father, who had ruled that the world could be saved from sin and death only in this way.  Jesus was speaking of that day to come when He told His disciples, in the words recounted in our Gospel lesson, “I when I am lifted from the earth, will draw all men to myself.”  It was in this way, He assured them, that the ruler of this world, Satan, would be cast out.  It was in this way that light would shine into the darkness, and that they, having a share in it, would become children of light.

This was no easy thing to understand.  In the eyes of so many people, even most of those who were closest to Him, the Cross marked Jesus as a failure, one rejected by God.  But in truth it was His greatest victory. The man on the Cross appeared the weakest of all: the pawn of the powerful, beaten down by the force of violence, overshadowed by a sky turned black.  But this was precisely the moment when He was reversing the ancient curse, toppling the prince of this world from His throne, and laying the foundation of the kingdom of light that will never be defeated.

“The Lord,” today’s Psalm says, “has made known his victory.  His righteousness has he shown in the sight of the nations.”  And how does he reveal His victory?  He does it through the Cross, which as today’s feast proclaims, is holy, the holiest of all earthly things, because through it God has done His greatest work.  The Cross is the unconquered weapon God used to bring righteousness to the world and to fill it with His peace.

His glorious Cross has become the true sign of God’s power, and the ground for our hope in a troubling and dangerous world.  Saint John Chrysostom explained it this way: “Never leave your house without making the sign of the cross. It will be to you a staff, a weapon, an impregnable fortress. Neither man nor demon will dare to attack you, seeing you covered with such powerful armor… Are you ignorant of what the cross has done? It has vanquished death, destroyed sin, emptied hell, dethroned Satan, and restored the universe. Would you then doubt its power?”[1]

We make the sign of the Cross to remind us of its power, to claim the fruit of its victory.  On the Cross, Jesus died to take away sin’s power and the power of absolution flows from it—so it means forgiveness.  On the Cross, Christ made a way through death back to the Father—so it means eternal peace and everlasting life.  On the Cross, God showed us how far His love extends, how He would endure all to bring us what we need: so it means blessing, and the assurance of His presence, protection, and help.

We need the Cross.  We need to gaze on it, to hold it tightly and to trace it on our bodies.  You may not all feel that you need it in all those ways—ritual seems more natural for some of us than others.  But some of us desperately need that sign of the Cross.  Because it doesn’t always appear that God is winning, that evil has been defeated, that light is shining into the darkness.  Some of you struggle with tremendous burdens: crippling diseases and disorders, intractable conflicts in your families, jobs that provide no satisfaction and continual anxiety for you.  For some of you, there seems to be much more evidence for the world’s destiny being in the hands of wealth, power and violence than the man on the Cross.

We need the Cross to save us from cynicism, to keep hope alive, to distinguish the ways of dealing with this world that will endure from those that have been defeated and are passing away.  We need to be reminded that we have been set free, that since our Baptism, we bear on our brows the sign of victory.  We need to be reminded that God is not silent or weak or absent, but that in Christ He has done a great thing, and He will soon return to complete His work. The sign of the Cross says all those things, and I believe that if you use it in faith, it will not fail to help you see this in new and different ways.

I came across a beautiful new hymn about a year ago and we will sing it as our first communion hymn today.  It’s called “Goodness is stronger than evil,” and it is based on a prayer written  a few decades ago by Archbishop Desmond Tutu, who will probably be remembered as the most important Anglican Christian of the twentieth century.

Archbishop Tutu led the Church in the Province of Southern Africa, our sister denomination, during the final days of that nation’s apartheid regime.  Over the course of a long and courageous ministry, he suffered in many ways at the hands of those who denied his full humanity and wanted desperately to silence his call for justice.  But Archbishop Tutu did not give up.  He did not grow bitter.  He did not lose the desire to see real reconciliation.  He did not forget to be merciful.  When his side in the struggle prevailed, and new laws brought justice and equality for all races, He found the grace to lead a process of truth and reconciliation that has done so much to heal the divisions of many generations.