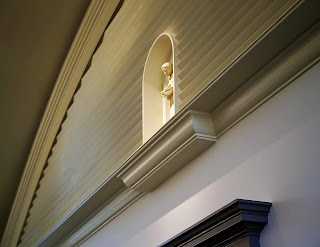 We welcome you to this evening’s presentation, Light in Midwinter.  We gather in the cold, as the sun has nearly run its course, to explore and perhaps to meditate a bit on the design of this space where the people of Saint Francis gather to praise God.  Thanks to the generosity of many of you and the skill and hard work of others of you, this church was renovated during the course of last year.

Our architect and designer, David Tozer, is also among those who gather here to pray week by week.  He will discuss some of the alterations that were made: their inspirations, purposes, and unified effect in filling this space even more completely with light, color and harmony.

It might be helpful, though, to begin our story many centuries before anyone ever broke ground at this place to build a house of God.  Church architecture, more than most crafts, bears the weight of centuries of tradition and symbolic intention.  David is creative, to be sure, but his is a creativity normed by a deep and respectful awareness of what has come before.

Many of the world’s oldest and most beloved buildings were designed for religious worship.  Part of their enduring power lies in the message behind their use of balance and proportion, light and shadow.

Light is a deeply significant category in Christian thought about God and has long played a pivotal role in church architecture.  We believe that light was the first of God’s creations, that He pronounced it good at the beginning of all things.  God Himself is like light, because he can pervade all things without breaking them down.  Throughout the Scriptures, light is a metaphor for wisdom and joy, gifts that come from God to His people and that enable them to understand and love Him more fully.  “In thy light,” says the Psalmist of God, “we see light.[1]”

Jesus described Himself as the Light of the World,[2] one sent to bring true knowledge of God, destroying the power of darkness, dispelling fear and corruption.  He urged His disciples to become children of light,[3] living honorably in the world and bringing hope to those in despair.  In Christ’s eternal kingdom, all is light, as Saint John wrote in one of the Bible’s most beautiful passages: “The city has no need of sun or moon to shine upon it,” he said, “for the glory of God is its light, and its lamp is the Lamb.  By its light shall the nations walk; and the kings of the earth shall bring their glory into it, and its gates shall never be shut by day—and there shall be no night there.[4]”

It’s surprising in some ways that for over a millennium, most Christian churches were rather dark and heavy buildings, following architectural patterns inherited from the Romans.  In the 1130’s, Abbot Suger, who had responsibility for the royal abbey at San Denis, near Paris, made a monumental step when he renovated the choir of His church, filling it with three storeys of windows. His new concept swept across Europe, as church builders competed to make walls thinner and vaults higher so the spaces for worship could be filled with more light.  We call the fruit of their labors Gothic architecture.

Suger wrote an account of his undertaking, and in it he said that the church was intended to be a kind of antechamber for the New Jerusalem, a space whose beauty would gesture to that land of endless day where we will behold the face of God forever.  The space was intended to spur the mind, so that as we lift our eyes to heaven, we lift our hearts as well.  Suger’s little book contains this striking description of his project:
The noble work is bright, but, being nobly bright, the work
Should brighten the minds, allowing them to travel through
the lights.
To the true light, where Christ is the true door…
The dull mind rises to the truth through material things,
And is resurrected from its former submersion when the
light is seen.[5]’

As David will explain in more detail, the inspiration for this particular space comes from the architecture used by Christians some five hundred years after the abbot’s time.  As classical architecture was being revived in England and here in her colonies, churches were built with windows even larger than those of Suger’s choir.  The clean, angular lines, and balanced proportion of the design carried its own message, one that compliments what was intended at San Denis.  God’s truth is open to all who seek it, this building says.  Christian teaching and practice bring order and focus to life.

This is what so many of us here have discovered, and why we return to this space week by week to hear God’s word, to sing His praise, and to commune with Him in His sacraments.   For us, also “the dull mind rises to the truth through material things.”  Our hearts, too are lifted up, and joy floods our souls.  “It is the God who said, “Let light shine out of darkness,” who has shone in our hearts to give the light of the knowledge of the glory of God in the face of Christ.[6]”