Plenteousness: A Sermon for Pentecost 9 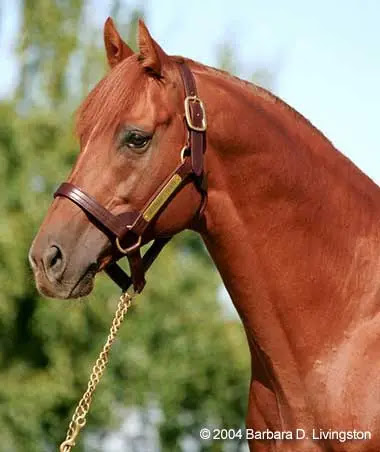 “He distributed them to those who were seated, so also the fish, as much as they wanted.”
St. John 6:11

It didn’t take us long to see that Big Jim wasn’t like any other horse in the barn.  He was several hands taller than the quarter horses, to begin with, and he ate an awful lot more.  And he was our only horse with a glorious past.  Big Jim arrived at our small farm through the auspices of Fred Goody, one of my father’s more eccentric friends.[1]  Fred was from the mountains of West Virginia, and had an astounding number of connections.  Besides Big Jim, he brought us a coon dog and some rather odd pieces of furniture.  You didn’t ask too many questions about Fred’s procurements, but we were given to understand that Big Jim was a thoroughbred, who had once been an item on the racetrack at Charles Town.  His glory days were behind him, and our place was the stop that kept him from the glue factory.

For a thoroughbred, Big Jim was a remarkably calm and good natured animal, and I had no trouble catching him for his feedings every day.  But after he’d been with us a few months, and had put on a few pounds, we out for a family ride on a Sunday afternoon.  Dad was riding Big Jim, and we emerged from the woods into a long clearing.  Dad wasn’t sure what the signal was, maybe something the horse heard or the way dad shifted in the saddle.  But in an instant, it was as if Big Jim was rounding the final turn at Charles Town, the crowd cheering and the flags waving.  He sprang into action, his muscles churning, his neck thrust forward.  None of us had ever seen a horse move like that in our back field.  Dad said it was the ride of his life, that it was like Jim was flying through the air.  He would be leaning back a bit further in the saddle from then on, just in case Big Jim had a mind to relive old memories again.

We saw something new in Big Jim that day.  His actions revealed something about who he really was that hadn’t been clear to us before.  Big Jim showed himself a majestic animal, a champion, a creature to be handled with a bit of awe.

The miracles of Jesus are a bit like that Sunday afternoon in our back clearing.  Of course they were occasions for relieving human needs: sickness, sorrow, hunger.  And they were signs of Jesus’ deep human compassion for those in distress.  But above all, they were intended to reveal Jesus’ identity, to confirm that He had been given divine power.  When Jesus worked miracles, they identified Him as the long-promised Messiah, the One sent by God to bring His plan of salvation to completion.

And the miracle recounted in today’s Gospel, the feeding of the five thousand, is in some ways the most significant of them all.  It is the only miracle described in all four of the Gospels, and in each Gospel it plays a central role in the unfolding story of Jesus’ life and mission.  It was important because feeding hungry people always had a central role in God’s faithful care of His own.  Our Vacation Bible School this week focused on God’s power, and we began last Monday with stories and songs that promised that God has the power to provide.  That was a great way to start the week, because it is such an important theme in the Scripture.  We might think of Psalm 145, which reads, in the majestic translation of the old Prayer Book,
“The eyes of all wait upon thee, O Lord, and thou givest them their meat in due season.  Thou openest thy hand, and fillest all things living with plenteousness.”[2]

God filled all things with plenteousness in creating a world of such abundance.  And He had worked through patriarchs and prophets to relieve His people in their hunger.  We might think of Joseph, raised by God to a position of authority in Egypt to open the storehouses to his hungry brothers and their families; or Moses, who prayed to the Lord, and was sent manna in the wilderness.  There’s a very close parallel to the story in today’s Gospel in II Kings 4, when the prophet Elisha multiplied twenty loaves of bread to feed a hundred people, so much that there was even some left over.

That’s sort a junior varsity miracle, though, next to what Jesus does by the side of the Sea of Galilee.  There’s even less material, just five loaves and two fish, and the crowd was much, much larger, and they are starving out in the wilderness.  The disciples are rightfully overwhelmed by the task of buying enough provisions to give just a little to each of them.  But Jesus isn’t thinking in term of snacks.  He was aiming to “fill all things with plenteousness.”  He took what was shared, and when He had blessed and broken it, He distributed it among them.

And how they enjoyed themselves, that hungry crowd, how they feasted on that unexpected abundance!  Prudentius, the great hymnwriter of the Early Church captured the joyful spirit of the event and the wonder it awakened when he wrote:
The stuffed boy strives with undigested fare
The waiter groans beneath his heavy load.
Who can a great feast spread from stores so few?
Who but the maker of our frame and all
That nurtures it, who shaped the world from naught…
All that now is was naught: that nothingness
Was into being brought and bidden grow.
Small was the first creation, but it grew
Till it became a mighty universe.[3]

“Who can a great feast spread from stores so few?”  The crowd goes there very quickly, with rather mixed results.  Some of them remember old Elisha’s miracle, and are sure this Jesus must be a great prophet, returned to call the people back to God.  Others remember Moses in the wilderness and are ready to crown him a new king of Israel.

And Jesus is prophet and king as well, of a certain kind.  But He’s more than that.  His disciples, and later the filled crowd, suffer from a failure of imagination.   He, as our Epistle lesson says, “is able to do far more abundantly than all we ask or think.”  The superabundance of this miracle reveals that Jesus is not merely a prophet or king, but the “Maker of our frame and all.”  Jesus is God Himself become one of us to cleanse us from sin and raise us to new life.

The twelve baskets left over point to a mission yet to be accomplished.  There would be a new people of God, a new twelve tribes raised up from Jew and Gentile, slave and free, of all races and tongues.  Jesus would sustain this new people with His own life, as He will go on to explain in the discourse that will form our Gospel lessons for the next month.  There was plenty that day at the lake, but part of its bounty was that this feast pointed beyond itself.  The baskets of bread and fish hint at the the living bread of the Eucharist, in which, as our Epistle says, we “know the love of Christ which surpasses knowledge” and are “filled with all the fulness of God.”

Over the past week or so, as I have been getting to know you here at Saint Timothy’s, it has become clear to me that Christ is present among you, and that you are thriving through the abundant life He alone can bring.  I was talking with a parishioner this week who is actively involved in many ministries, but whose husband only worships here a few times a year.  “Does he support you in being so involved in the Church?” I asked her.  Without hesitation, she answered, “Yes, because he understands that the things I do here are what make me truly happy.”  I think it’s like that with many of you.

It’s been wonderful to learn about how many of you are finding joy and fulfillment in your life by sharing your gifts and participating in so many different ministries.  There must have been a hundred people involved in this week’s Bible school, as we taught some of our youngest disciples about God’s power to comfort, heal and forgive.  We sent dozens of young people off to Dungannon yesterday to bring hope and relief in Christ’s Name to those in distress there.  And I’ve talked to others about the pastoral ministry teams, the educational programs, the ministries to those who are hungry in this community.  Your rector, who is so full of wisdom and compassion, cannot say enough wonderful things about what is happening here.   Everything I have seen confirms my first impression that is a vibrant, caring and active community, where the Spirit is at work and lives are being changed.

Believe me, I’ve read the Sunday Post.  There are lots of other places you could be today.  There are lots of places in this area where you can get some guidance for your life, hear some good music, or help the poor.  But you have chosen to come here, to be involved in this community.  Because there’s a crucial difference here, something you can’t find in the concert hall, the op-ed page or the social services agency.  Jesus is here in a unique and powerful way, and as He did by the sea so long ago, He gives abundantly still today.  When we meet Him here, and receive the bread of His life, we are filled with His plenteousness.    Jesus is here and that makes all the difference.
[1] Not his real name.
[2] Ps. 145:15-16.
[3] qtd. In Oden, Thomas C. and Christopher Hall.  Mark.  The Ancient Christian Commentary Series.  Downers Grove: Intervarsity,  1998, 87.
Posted by Rev. Mark A. Michael at 4:03 PM