Commentary: Gettysburg, A Meditation on War and Values, by Kent Gramm 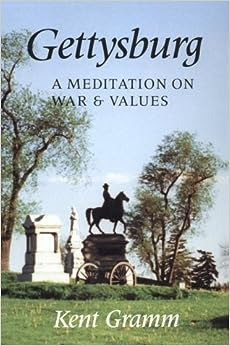 Back in Easter Week, we marked the 150th anniversary of the end of the Civil War, joining churches around the country in ringing our bells to mark time when peace was announced following the surrender at Appomattox.  I grew up in Western Maryland, a land full of reenactors, relic hunters and amateur battle historians, and I’ve always had an interest in this defining event of American history.  Back in 1861, I resolved that I would read take down Shelby Foote’s massive Civil War trilogy from my shelves, where it had gathered dust for over a decade, and read it through as the cycle of anniversaries passed.  Like many of my reading projects, this one proved a bit too ambitious, and I moved on to other things back in 2012.

However, when my Lenten reading finished, I decided to take up Kent Gramm’s Gettysburg, a book passed onto me with high commendation by our senior warden, Paul Hager.  Paul is an American historian by training, with a special interest in the Civil War, and he assured me that this is one of the best books of its kind, well worth a read.

He was right, and I enjoyed it a great deal.  Gramm is a master historian, with an encyclopedic knowledge of the battle and its cast of notables.  But he’s also an observant critic of contemporary American life, and building on a maxim of Thoreau’s in his foreword, defines the historian’s task as finding out “not what was, but what is.”  He is acutely aware of the massive tragedy of the war, and seeks to discern if the sacrifices made between the ridges 150 years ago were truly worthwhile.  Generally speaking, he finds us wanting.

I thought I knew a fair amount about the Battle of Gettysburg, having given a few tours of the battlefield to out-of-town friends when my wife was studying at the seminary there.  But Gramm has walked every inch of the site, analyzed every possible strategic factor, and discovered the deep human drama pulsating beneath the well-known facts of those three bloody days.

Civil War historians tend to be a bit like baseball fans in their fixation over maps and statistics, and Gramm assumes a great deal of specific knowledge in his readers without providing them any diagrams.  He delivers his analysis with great confidence, and others could better judge the accuracy of his hypothetical alternatives at each of the battle’s strategic moments.

I enjoyed his storytelling the most, especially his humane and respectful treatment of John Reynolds and Dorsey Pender, two notable generals who perished in the fighting, leaving behind heartbroken lovers.  The heroism of the Iron Brigade and the folly of Pickett’s charge are described in careful and compelling ways, but he also highlights the importance of minor characters, and explains the mechanics of weapons and topography with helpful lucidity  The historian can easily be cruel when his subjects are men under intense pressure making decisions with mortal consequences.  While Gramm is no hagiographer, he does maintain a proper sense of awe in handling the epic days of July, 1863.

Which makes his rather harsh judgment of our own times a bit surprising.  Gramm is deeply disdainful of the materialism and injustice of contemporary American society, and his critique is emboldened by being written against the backdrop of the Gulf War.  He pins a great deal of the blame on “fundagelicals”—conservative evangelicals, whom he excoriates in the harshest possible terms for their complicity with the military industrial complex.  Some of his critiques are probably fair, especially regarding the continuing legacy of racism.  But his rants grow tiresome, and are sometimes only loosely tied to the historical sketches.

With two seminary degrees, Gramm also fancies himself a theologian, and many of his chapters build to a kind of mystical climax.  The Civil War was fought in a landscape shadowed by churches, and many of its heroes were deeply religious men, including, in his own way, the great redeemer, Lincoln, slain on Good Friday.  The role of providence features heavily in Lincoln’s iconic speeches about the war, and many historians of the events have found it necessary, in their own way, to “justify the ways of God to men.”

Gramm is rather hard to follow in this respect, for all his Psalm quotation and dramatic atonement imagery.  I think he fancies himself a radical Lutheran, but with much more of the “hidden God” than “Christ present in faith.”  Perhaps theologies forged on the battlefield always tend in this direction, and we sinners never really find the longed-for “new birth of freedom.”  Or maybe Gramm is really a first-rate storyteller who’d have done better to write a humbler book.
Posted by Rev. Mark A. Michael at 9:49 PM